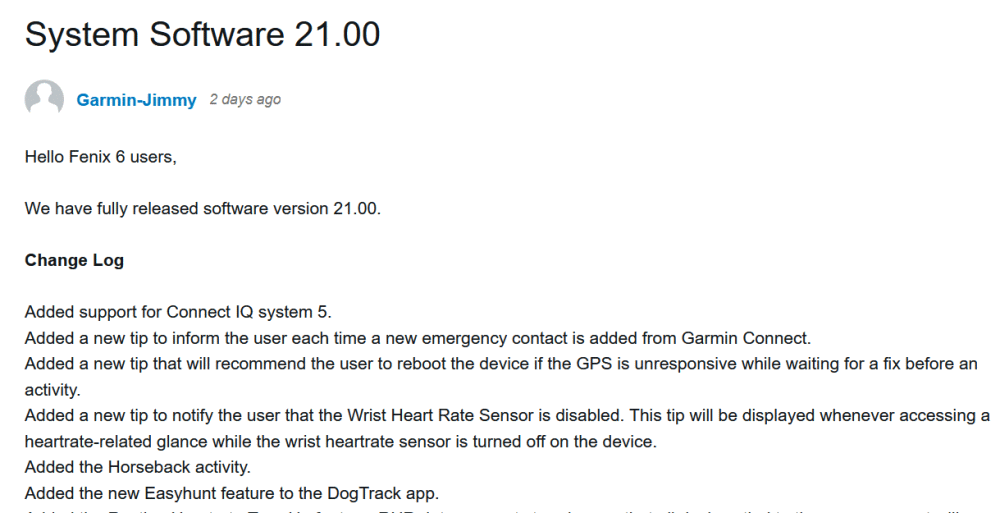 Garmin changed the BETA process for 21.00, and I happily opted in. No major issues to report, but I have been having an ongoing problem with the Training Effect (TE) displayed on the initial activity report since 20.86. Where it shows the TE from the previous activity (or nothing if I rebooted b/w activities) on the first screen, but the correct one when digging into the details (see below).

They are claiming a full rollout, so you should be able to get it from Garmin Express if it’s not already on the watch.

Added support for Connect IQ system 5.
Added a new tip to inform the user each time a new emergency contact is added from Garmin Connect.
Added a new tip that will recommend the user to reboot the device if the GPS is unresponsive while waiting for a fix before an activity.
Added a new tip to notify the user that the Wrist Heart Rate Sensor is disabled. This tip will be displayed whenever accessing a heartrate-related glance while the wrist heartrate sensor is turned off on the device.
Added the Horseback activity.
Added the new Easyhunt feature to the DogTrack app.
Added the Resting Heartrate True-Up feature. RHR data now gets trued-up so that all devices tied to the same account will have the same RHR value.
Added enhanced strength functionality, which includes an improved workout preview with a map of muscles that will be used, improved UI in free mode and workouts, and improvements to the rep and weight editing experience.
Added animation to progress arc when viewing Intensity Minutes widget.
Updated incident detection to better distinguish between supported and unsupported activities.
Updated inReach messaging to now allow the watch to send messages up to 160 characters in length.
Updated support for Shimano Di2.
Improvements made to on-device sleep detection and sleep staging.
Improvements made to Run/Idle detection algorithm, particularly when detecting when the user has stopped.
Fixed an issue when setting timer alerts on the Track Run activity.
Fixed an issue where one could preview workout videos for user created workouts.
Fixed an issue where inReach menus are available while in Expedition mode. These menus are no longer available when in Expedition mode.
Fixed an issue where the time of day would intermittently get cut off on the lap alert.
Fixed an issue where the lap banner would not go away when on the music player.
Fixed an intermittent issue where the backlight would not turn off in Expedition mode.
Fixed an intermittent issue where graphical data fields would not render properly.
Fixed an intermittent issue where the golf round summary would display an incorrect net strokes value.
Fixed slight UI delay when accessing widgets from the watch face.
Fixed UI issue on the golf last round widget.
Fixed potential issue causing 0 pool swim distance. [Sensor hub 18.02]
Connect IQ stability improvements and bug fixes.
Other minor improvements and bug fixes. 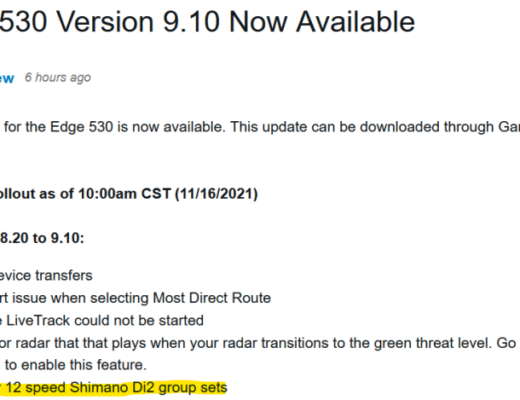 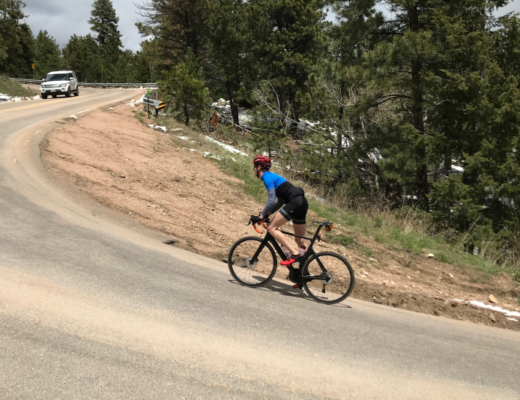