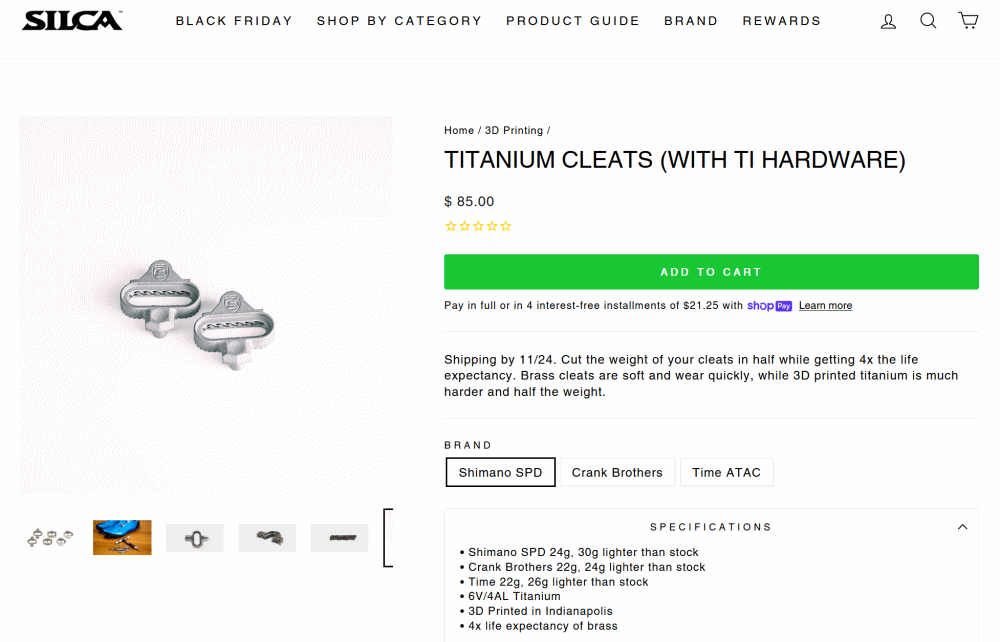 I think it’s great that SILCA has decided to manufacture, er… print, titanium SPD cleats. Weight Weenies rejoice! But why dissemble in the marketing of your shiny new overpriced cycling product?

The first problem is the weight saving comparison; SILCA is claiming “Shimano SPD 24g, 30g lighter than stock“. I happen to have a scale, and have weighed many sets of Shimano SM-SH51 SPD cleats, and 9 times out of 10, they are 51g, but hey, we’ll give SILCA the benefit of the doubt and do some math against Shimano’s claimed weight of 52g.

52g-24g = 28g. So 2 fewer grams saved than SILCA claims. One could argue that it’s only 2g, but when the point of this product is to sell kit to the Weight Weenie, so those 2g of deceit are hefty in nature.

The bigger issue though is around their durability claims. I have no doubt that the SILCA titanium SPD cleat will last longer than a brass cleat of any variety. Where I take issue is with the comparison to brass cleats in the first place. Shimano SPD cleats, both the SM-SH51 and SM-SH56, are made of steel; not brass. Anyone who’s watched them rust after a salty winter ride knows this.

So why is SILCA making those claims? I suspect it’s possible that their titanium cleat is actually softer than the steel Shimano uses in its cleats. Obviously, it’s impossible for me to say for sure without knowing what kind of steel they’re using, but a quick bit of Googling puts “soft steel” @ 120 and Titanium @ 70 on the Brinell scale (higher numbers are harder materials, harder materials wear slower). I wasn’t able to find a Brinell number for the type of Ti that SILCA is printing with, so this could be way off, or it could be spot on…

UPDATE: It’s quite possible that SILCA made a typo in their product page and the cleat is actually made from 6Al/4V titanium, and not 6V/4AL as noted in the screenshot at the top of the post. If this is the case, it would explain why I couldn’t find the Brinell number before, and it would likely be harder than the Shimano SPD cleat. But, again, without knowing the kind of steel that Shimano is using, it’s hard to say for sure.

It’s also worth noting that if it is 6V/4AL Ti, then there is potential that the pedal will become the wear item. It’s probably not going to be an issue for Shimano SPD pedals, but other brands (e.g. Xpedo) don’t use as hard a material in their pedals. I have noticed this issue with both sets of Xpedo pedals that I use with Shimano’s SPD cleats. It would only be worse with a 6V/4AL Ti cleat. 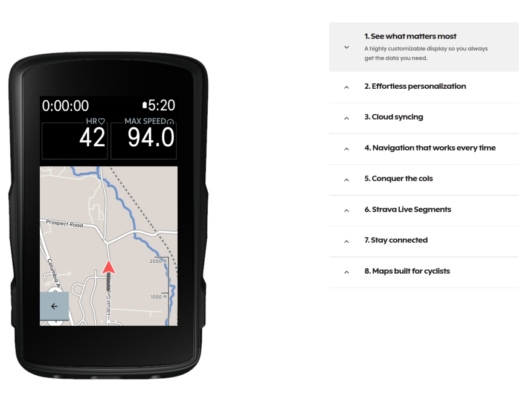 Hammerhead Karoo 2 Is Out 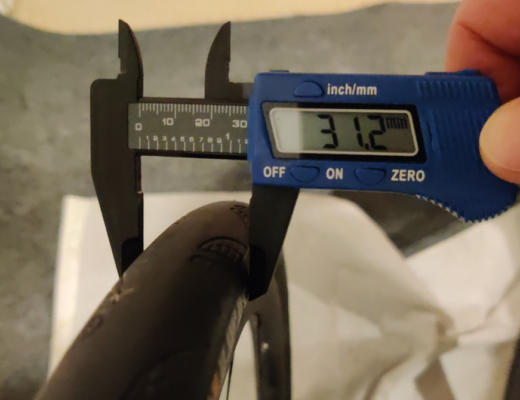 At 208 lbs, the cleat is not where my weight savings are to be had…

IMO, this kind of optimization makes zero sense for CX, gravel, MTB, or fat biking. In anyone of those disciplines you’re going to end up with more than 28g of mud, dirt, or snow on your bike and body :).

This website uses cookies to improve your experience while you navigate through the website. Out of these cookies, the cookies that are categorized as necessary are stored on your browser as they are essential for the working of basic functionalities of the website. We also use third-party cookies that help us analyze and understand how you use this website. These cookies will be stored in your browser only with your consent. You also have the option to opt-out of these cookies. But opting out of some of these cookies may have an effect on your browsing experience.
Necessary Always Enabled
Necessary cookies are absolutely essential for the website to function properly. This category only includes cookies that ensures basic functionalities and security features of the website. These cookies do not store any personal information.
Non-necessary
Any cookies that may not be particularly necessary for the website to function and is used specifically to collect user personal data via analytics, ads, other embedded contents are termed as non-necessary cookies. It is mandatory to procure user consent prior to running these cookies on your website.
SAVE & ACCEPT
wpDiscuz
3
0
Would love your thoughts, please comment.x
()
x
| Reply